Over the weekend we went to Acorns Resort in Milford, Kansas. It was about a 3 hour drive for us.

Following my last post unplug, I did turn my phone off while we were there. I did catch myself once, while I was in charge of Chris’ phone. I was only on it for two minutes though, checking a notification.

We rented a 5 bedroom cabin for the weekend. It was super nice, much more than any of us were anticipating. Though, the beds were miserable! My older brother, who was in the navy, says we are just spoiled. I agree, we are spoiled in comparison to the racks on the aircraft carrier (and I am sure many other “beds”).

Friday, after we got there, we got settled in. Three bedrooms were upstairs, that is where me, Chris, and our 2 kids were. My older brother and one of my younger brothers took the other 2 rooms.

We brought our dog, Kona, on this trip. It was the first time he has been in the car for more than 10 minutes. The first 30 minutes, he was a complete spaz! He would bark at everything, go back and forth in the van, and jump up on everything he could. I think he would have preferred if I laid in his bed in the back while he sat in the front seat.

We were a little nervous about how he would act at the cabin. Knowing that he chases everything he sees, we weren’t sure how it would go. Fortunately, he adapted quite well! 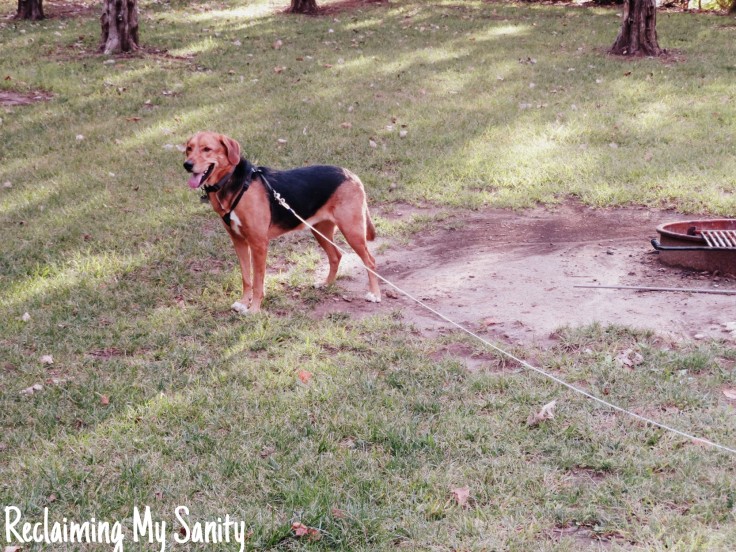 After we all got settled, my brother grilled up some hamburgers. We had hamburgers, potato salad, and chips. I really liked the fact that the table was big enough that we could all fit around it!

My uncle, aunt, and cousins all came over. Some of us girls had a minor dance party trying to remember the Wii dance steps to Michael Jackson’s Beat It. Eventually, I had to call call it a night because the kiddos were tired.

Apparently, the guys stayed out until around 2am. I didn’t hear a thing. I take that back, I did have to listen to Kona whine all night. For some reason, he was afraid of going down the stairs and the wood floors. (We have wood floors at our house, but no stairs). I think he was whining for Chris.

Saturday, I woke up with a stiff back. I toss and turned all night. Like I said, those beds were bad. I didn’t let it stop me though!

My sister and mom made breakfast, breakfast burritos. We hung out at the cabin, until we had our plan figured out for the day. We were planning on renting a boat, which wound up being the 12-4pm slot. We also rented canoes and kayaks.

We first went on the pontoon, well, most of us (there was a person limit). It was a perfect day for it! Mid to upper 70s, a little cloudy, and a slight breeze. 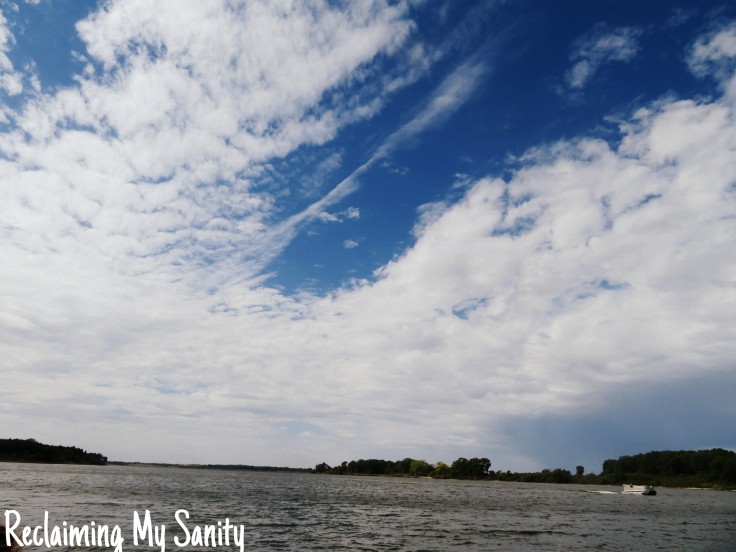 We all had so much fun! It was especially funny when we would hit the waves just right that the people in the front of the boat would get splattered with water and screech while laughing at the coldness.

I think all of the adult males especially enjoyed driving the boat. Apparently that makes them feel special and masculine (hmm?).

I just liked sitting there absorbing everything around me. The wind in my eyes, the waves, the fish jumping behind the boat, the birds flying, the laughter, and everything in between.

We went out for about an hour. Almost everyone got off. My older brother, Chris, Poppy, my younger brother, one of my cousins, and myself went back out. This time, we went almost as far as the lake goes (the lake is 16,000 acres). It was so relaxing! It was like anxiety releasing, too. We had the music cranked up and just enjoyed what we were doing.

We wound up stopping so that the boys could jump off and swim for a little bit. It was funny watching them jump and flip into the water. The breeze made it a tad cold for them when they got out, though (we forgot the extra towels). We sat there floating for a little bit while the sun warmed and dried them. Then we headed back to the dock.

We got back to shore and Chris decided to try out the kayak. I took Poppy and went to sit in the shade up on the hill with my mom and cousin.

It wasn’t long before Chris rowed his way near us and asked if I wanted to come. I was hesitant at first, because I was afraid of tipping over. Then I decided, “no, I am here to try new things and be more adventurous.” So I went back down to the beach area and met Chris there.

We started with the canoe. It wasn’t really hard to row, but it was interesting to turn. 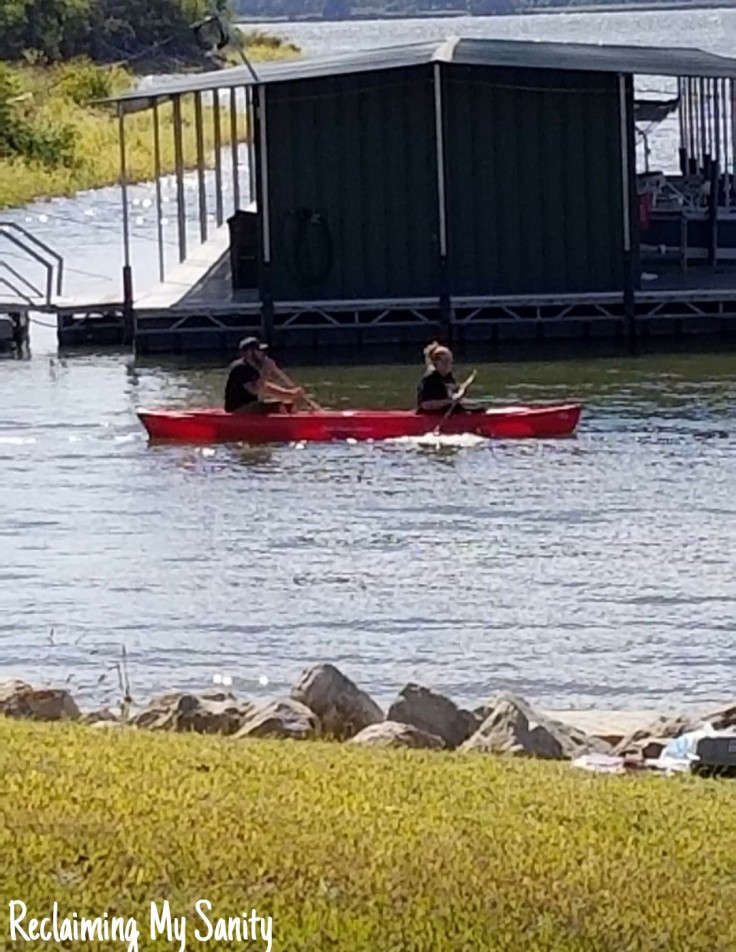 I didn’t trust the canoe as it kept rocking with the waves and wind. We went out and back in and I decided I had enough of that.

We took the canoe back and Chris talked me into trying the kayak. I was a little more nervous because I would be in it alone, but I actually wound up liking the kayak better than the canoe.

I still was too nervous to go too far. I learned how to control it better and kept going back and forth. When the rest of the group was coming back on the boat, we headed back to shore.

We went back to the cabin. Poppy was exhausted. I wound up laying on the couch with her for a bit while my mom and sister prepared dinner. We had “hobo” dinners; where you put meat and veggies in tin foil, fold it up, and  cook them on the grill. They were so good!

Later in the evening, my cousins, uncle, and aunt came over and we made Smores. You cannot go camping without Smores. I guess I should say glamping, since we weren’t in tents. Check that off our fall bucket list.

My sister, my cousin, and myself played a round of skipbo. I actually won, which never happens in that game for me. It was just good quality family time. Everyone was exhausted from all the lake activities, though. Half of them were in bed by 10pm. My nephew and Pickle passed out on the lumpy couch (no, seriously, it was heavily indented). Poppy fell asleep on my lap.

I realized I was all alone inside, so I decided to call it a night. I put Poppy in her playpen while I carried Pickle upstairs. I laid him on the couch, gave him his blanket, and went back downstairs to get Poppy. I got her and then went upstairs to bed.

I woke up at 530am, wondering what time it was. I think I laid there for about 30 minutes before falling back asleep. Everyone was up by 9am. We ate and started packing things up. By 1030am, we were all ready to go.

I don’t know about anyone else, but I wasn’t ready to leave. I definitely want to do it again and for a longer stay. All year I have been craving adventure. This little slice was nice and very much needed, but it left me wanting more!

I feel so relaxed now, like I left my worries out on the lake (hopefully nobody else picks them up).

Chris does have tomorrow off, so we have a day to catch up on the loads of laundry and whatever else needs done around here.

Seek some adventure, it is okay to let loose once in awhile. You can surprise yourself.