Every year I would hear about the hot air balloon festival AFTER it had already happened. Everyone always said how cool it was and what fun they had.

This year, Facebook kept reminding me that the event was coming. I was determined to go to see what the hype was.

I told Pickle earlier today that we were going on a date and it was going to be a surprise. Of course, as usual he responds with, “can you just tell me!?” I said, “No! It’s a surprise. If I tell you then it would ruin the surprise.” He finally agrees and we went on with our day.

Chris gets home and we get ready to go. On the event page it was limited as to what they had there, as far as food goes. All it said was “artisan”. Knowing Pickle the way we do, we know he likely won’t eat whatever it is they have. So we decide to go to McDonald’s drive through for a happy meal. He was happy about that!

Upon pulling into the event area we can see the inflatables for the kids to play in, white tents, and giant inflated beer bottles. We are directed to the parking area, which was just a grass field behind some houses, and we park. I put the baby carrier on and put Poppy in it. We get the double seated stroller out and load it up. Making sure to grab our large blanket to sit on.

Unfortunately I wasn’t aware of this because I wound up getting stabbed in the foot! I should have worn tennis shoes. I’m ok though.

We get to the entrance and pay our fee; $10 per person, kids 5 and under are free. Not too bad. We walked by a lot of tents with vendors in them. There were these really cool hand made hot air balloons. I almost got one. We saw some interesting yard decorations: sasquatch, a sweet looking black dragon, and a bull built around a grill. Chris put his name in a drawing for a white 2017 Ford Mustang (good luck with that one babe!). Then we make our way around and see food trucks! We haven’t really been to any food trucks, yet. They are all the rage right now I guess.

I decided I needed a snow cone. I went with the large size, knowing everyone would be sharing it, $7. The man working this snow cone place hooked it up! This thing was a gargantuan. Pickle decided we needed to make it a rainbow colored one.

Now, this was a balloon and wine festival. The signs said they had beer, too. I don’t drink, but Chris enjoys tasting new beers. So we went to find him one. They didn’t have any new beers that he hasn’t tried yet. He wound up paying $5 for a 12ounce can of Boulevard Wheat.

On to the inflatables! Of course Pickle wanted to do them all. We like giving him options to choose from, so we said he could pick 3 of them to do. He did an obstacle course, a monster truck bounce house, and one where you climb up and go down a slide.

It was getting close to balloon launch time, so we made our way to the field to sit down. We find a spot, set up the blanket, and sit down.

I don’t know about anyone else, but when I hear “balloon festival” I am thinking at least 20 balloons if not more. I also was expecting some grand launching to occur. Maybe I watch too many Disney movies, ha-ha. 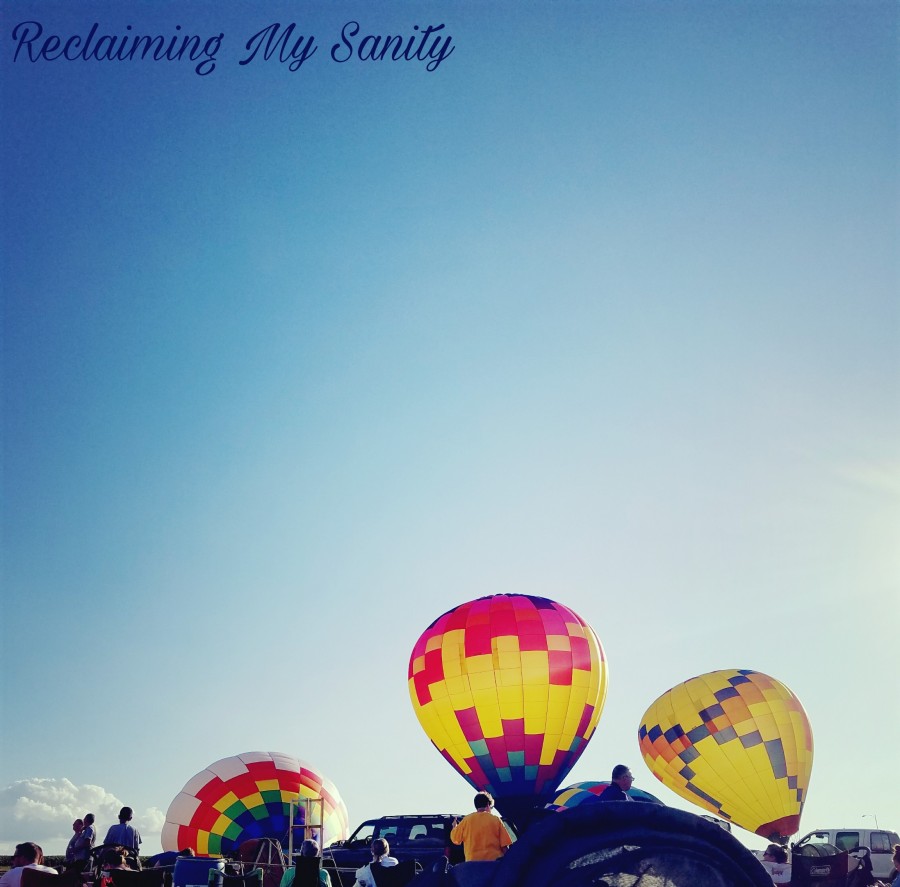 Needless to say I was disappointed! They had 12 balloons. Each launching off one after the other, not in any synchronization. I was expecting so much more! The kids were starting to get tired and frankly we were both less than amazed at the prices and lack of balloons. We wound up leaving.

I don’t think it lived up to the hype. Perhaps the stories I have heard are from those that do the wine thing. Maybe they were drunk and it seemed more amazing to them. Maybe they use to have more balloons, I don’t know.

Moral of the story? Don’t set your expectations based on what someone tells you. Everyone’s perspectives and lifestyles are different. What is fun for one person may be boring for the next.

All in all, I am glad we went for the experience with the kids. I think next time, though, we can just watch from a distance without paying to go in.

Have you been to a balloon and wine festival before? If so, how many balloons did you see? Just curious 😊

I hope everyone has a great weekend!