CLEAN OUT YOUR MAKEUP COLLECTION.

I don’t wear a lot of makeup anymore. But, I have accumulated plenty of makeup over the years. I actually recently went through most of the makeup I had and gave some to Monkey to play with. As a teenager and in my early 20s, makeup was a gift I would receive for Christmas almost yearly.

The thing of it is, I probably never touched half of it. While I did love makeup and wore it regularly back then, I still didn’t need/use most of it. You know those makeup packs that have 900 eyeshadows you won’t ever touch? I got plenty of those back in the day!

After purging all of that I was left with my 2 little boxes of makeup and nail polish. So, for today’s challenge I decided I should go through those.

The little makeup bag has some hair things in it, tweezers, scissors, and some bobby pins, nothing really to get rid of. I went through all the nail polish and made sure none of it was old. Then I dumped out the makeup box into the sink. 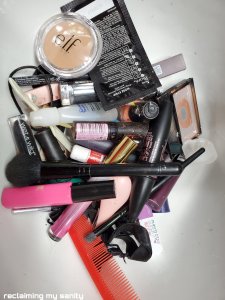 Definitely needed some organizing. I pulled out everything nail related and put it with the other nail stuff. I threw away some items that I never use (and the empty containers) and put the rest back into the box.

It was a simple task, but feels good to organize and sort through things.