Tonight I really did not feel like cooking. Chris suggested Casey’s pizza (because it is free)…barf! It is wicked hot outside. Who wants to cook when it’s this hot out…

I really was hesitant to cook anything because I knew the house would heat up fast. I originally had taken out sausage to make sausage and zoodles. However, it just didn’t sound enticing enough. I thought about making a zucchini bake but ultimately decided against using the oven because of the inflicting heat.

Anyway, I have really been trying to get back into my profile friendly lifestyle, basically eating keto.

When I got out the zucchini I realized I only had one left and the rest were cucumbers; common mistake right? Haha, oh well! I figured I could make my own recipe still with the one zucchini and sausage. I also looked at all the other veggies left from our farmer’s market extravaganza to see which needed to be used before they went bad. Really you could use any vegetables with this recipe. Bulk it up until your heart’s content. I wound up using peppers. I almost used an onion, but decided to use onion powder instead (hubby isn’t the biggest fan of onions). It was a win for both of us when we tried the finished product.

Assuming you want the recipe, here it is!

1. Cut ingredients; sausage in one inch pieces, zucchini 1/4inch pieces and then halved, dice the peppers

2. In a small bowl combine all the vegetables, spices, and oil; mix well

4. Once the sausage is done, take it out of the pan and put it in a separate bowl

5. Turn the heat down to #4 or #5 and add the vegetables. Stir often until softened to your liking (about 12 to 15 minutes for me)

6. Add the cream and sausage to pan, bring to a boil, stirring often

7. Add the cheese, stir until it is all melted

8. Turn the heat off, serve, top with a little bit of cheese and walla! 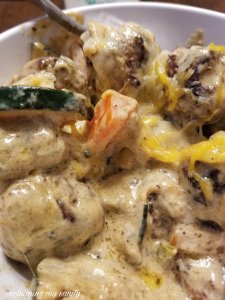