Over this past weekend we knocked off a few things off of our Halloween Bucket List.

On Friday, we went to my sister’s house for a family night. My practically sister-in-law made chili, I brought cinnamon rolls, and my mom made reese’s monkey bread. My mom had bought some Halloween stuff for the kids to do; painting and making cookies. I thought everyone else was bringing pumpkins, so I brought paint supplies and pumpkins. My mom also bought all the kids Halloween themed socks for them to wear.

Poppy picked a ghost, or as she calls it “booga”, to paint. Pickle picked a jack-o-lantern to paint. Poppy would rather paint herself and the coffee table, but her ghost was painted red pretty thoroughly. They also painted their pumpkins.

While the kids were painting, my brother Robert requested me to paint his face “something scary”. We wound up deciding on Jigsaw from the Saw movies. I did have my practically sister-in-law do the shading and finish his eyes once the black dried. Here is a pic from after I was done (before shading). 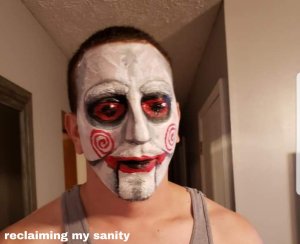 He did wind up going outside after he was done and creepily peddled a tiny bike in the street. It was quite amusing.

After painting and reminiscing for awhile it was time to decorate cookies. Now normally I am the one that does this with the kids. This year, I just have been a little lazy. It must have been too hot/humid because the dough was too squishy. They wound up putting big circles in the oven. When I went to look at it, they all merged together making one giant cookie. It was hilarious. Chris wound up saving the day and used the cookie cutters before the cookies were too hard. Each kid decorated one cookie. I forgot to take pictures. Poppy had a bat, it was black with orange sprinkles. Pickle had, I think a ghost, but he covered it in as many sprinkles as he possibly could. We reminisced awhile longer and then decided to go home. Pickle stayed the night with my sister and nephew.

Saturday morning, I did not want to get out of bed. By time I did, it was later than I thought it was. Oh well, it happens. We got dressed, grabbed some lunch, and headed to Target. We stopped by their optical place so I could order new glasses, but apparently they don’t take my insurance so I have to go back to my old eye doctor. We wound up shopping for some winter hats while we were there. It was pretty cold and we were going to the Pumpkin Patch. We left Target, picked Pickle up from my sister’s, and headed to the Pumpkin Patch.

Every year we go to Vala’s Pumpkin Patch. I have yet to see any pumpkin patch comparable to it.

We arrived and had to park “in Egypt” as I called it. I would say it was approximately half a mile from the entrance. It was a grassy field that hadn’t been mowed in awhile (plus the nonstop rain) so it was hard maneuvering the stroller through it, but we made it!

I was surprised how busy it was for the weather, but at the same time it is Vala’s and is there ever really a dead day there? I doubt it. We decided to stay close to wait for the dragon show to start. 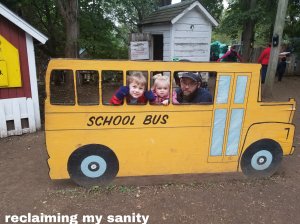 Before the show started, Poppy kept yelling “dragon, wake up!” Once he actually woke up, she was less than amused. She kept saying “hurts, hurts” and making fists. She wasn’t crying though, so I just held her to make her feel safe. She wound up liking it.

Once that was over we ventured on. We came across a play area where no one else was. You could build, pump water, dress scarecrows, or climb in an old fashioned bus.

After that, Chris took the kids on this tractor ride. The cars were too small to fit all 4 of us and they only had one car open. Once they got back we stopped at a food place nearby, we got pizza, nachos, and a drink. While we were eating my mom had called and said they just got in and they were going to find us. I told her where we were and we waitied for them. Here are some pictures from the the rest of the day. I didn’t get any from after it got dark.

Not pictured is the bonfire we had with hot dogs and smores, the train ride we all took, the haunted coal mine (kid friendly obviously), all the food (turkey legs, corn on the cobb, fudge, and apple cider donuts), the fireworks, and some of the other activities that I didn’t pull out my phone for. It was a lot of fun. I feel like you need at least 2 or 3 days there to see everything though. I think next year, we will just get a season pass.

Sunday was pretty uneventful. I slept in way late. I did get the lights put up in the windows (will post about that later). We went grocery shopping and then had a pizza movie night (we watched Black Panther).

After barely having any days off (from work) the last 2 weeks, it was a much needed well spent weekend.

What did you do this past weekend?