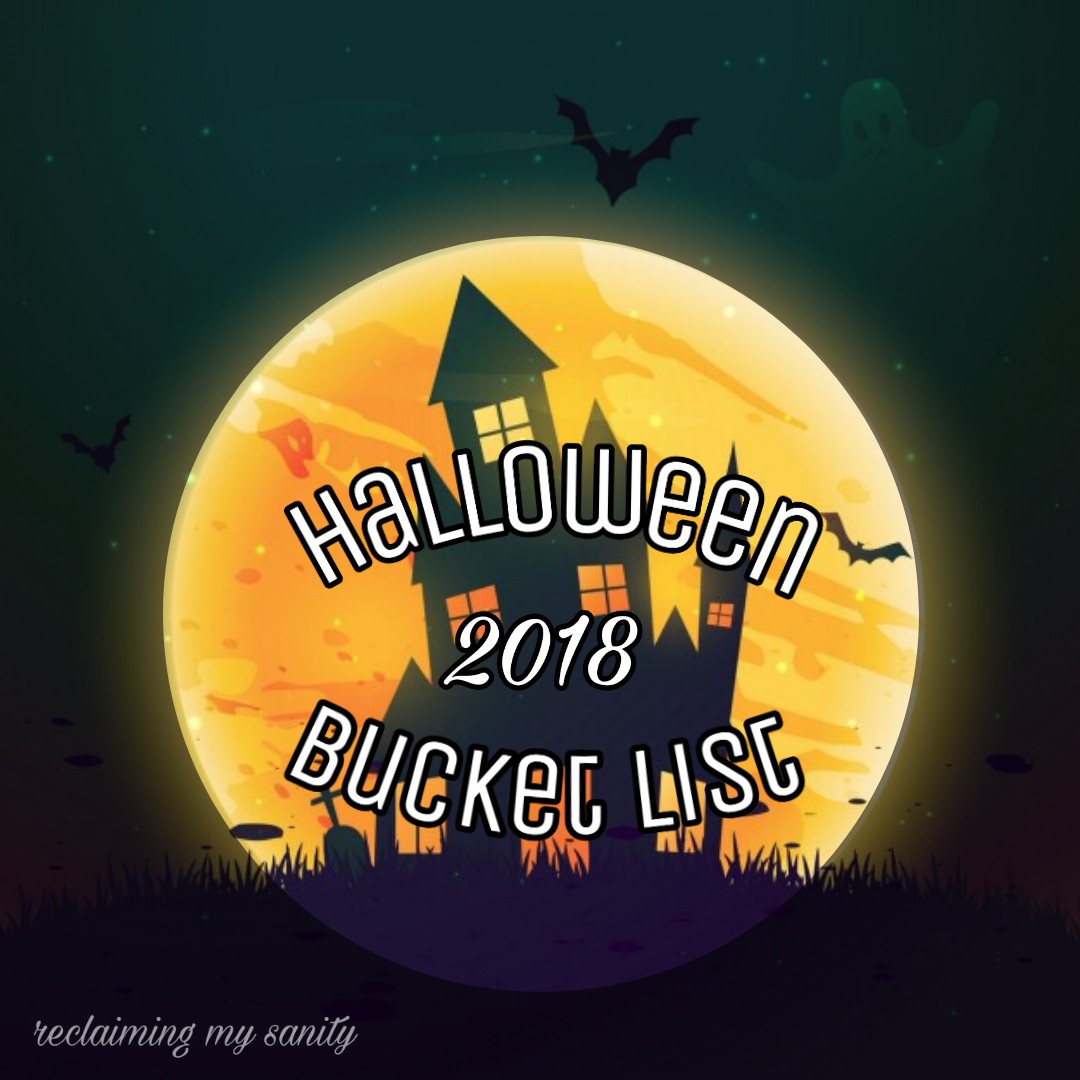 It is officially October! At our house we celebrate Halloween the entire month of October! There is just so much fun to be had! I decided this year that I was going to separate my bucket lists for Fall and Halloween. Check out My 2018 Fall Bucket List here.

I thought it would be fun to share each item on the list as we do them (not necessarily in the order it is listed).

I guess I could start with costumes!

This year, originally we were going to do a family theme for costumes. Ideas we had were; Peter Pan, Alice in Wonderland, and super heros and villains. We thought it would be cute if the kids were the heros (Batman & Robin) and the parents be the villans (Joker and Harley Quinn). I kept going back and forth on ideas, mainly because I felt I would spend way too much on my costume to try and be exactly like Harley Quinn. Eventually I had to make up my mind and decided that we didn’t necessarily have to match. Pickle definitely was already set on being Batman though, so we knew he would not change his mind. I figured, he can still be Batman and Chris could be Robin.

We wound up getting Pickle’s costume at Target on the day they did the 40% off sale. We wound up getting it for $15. Chris is going to be Robin, we are either going to get him a shirt and mask (with cape) or buy the whole costume. We have not decided 100% yet.

It did not take me long to come up with an idea for Poppy and I. I have been obsessed with Wicked for awhile. Seeing it live just solidified that obsession. I decided Poppy would be Glinda and I would be Elphaba. The only problem was, the only Glinda costume that you can buy is the one from The Wizard Of Oz (the pink dress one). Though “technically” it is the same character, the Glinda in wicked doesn’t ever wear that big pink dress. She wore many different outfits, but the most iconic one, I think, is the blue bubble dress.

I figured the easiest way to mimic the costume was by doing a tutu version. I found many tutorials on how to make a tutu dress. It really isn’t hard at all. You buy tulle, the mesh-like fabric, and I also bought some ribbon. I used 6 rolls of tulle (2 glitter blue, 2 regular blue, and 2 white). It made 3 layers which seems like enough for an almost 2 year old, though you could do more and make it fuller.

For the top part of her costume, I bought a blue leotard off Amazon. I was hoping they would have one that was already decked out in jewels, but they didn’t. I bought a plain blue one and some rhinestone adhesives. Here is how it turned out.

I think it is cute! Granted, I wish the stones came out exactly like Glinda’s dress. It’s okay though, it isn’t like she is going to wear this daily.

Another part I needed for her costume is her tiara and wand. I did make them, but I am not amused with how they turned out so I don’t think we will be using them. Plus, I don’t think she’s going to want to carry all that the whole time.

The last thing we needed was a candy bag or bucket. Me being a details person, I thought “what would Glinda carry for trick-or-treating?” Of course she would have something covered in jewels, but what? What would a witch use? Witch…witch = cauldron! Duh! 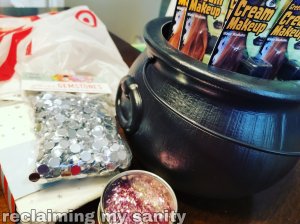 Originally, I was going to do Glinda’s pink party dress (hence pink glitter), but decided since Poppy likes blue and the blue dress was more recognizable that we would do that instead. I exchanged the glitter for blue glitter. First thing I did was paint the cauldron because I knew it would show through the rhinestones. I wanted it to match the dress.

After letting that dry, I started glueing the rhinestones to the cauldron. It took me 2 days to finish the cauldron because halfway through I let it dry (and my pinched nerve was mad).

Here it is finished. I love it! I think Glinda would be proud.

I think I am just going to get a tiara from the party supplies section and call that good. All that is left for her is to get some foam curlers.

As for Elphaba. I really really wanted to wear her black dress, but that would have cost me around $300.

I did not want to spend that kind of money. I figured what is another look that elphaba has that wouldn’t be hard to mimic? Her party dress! I found a teal dress on Amazon. I already have brown leggings and brown boots. I also bought all the green body paint that I could find, a black wig, and a black witch hat. I figure the hardest part will be turning myself green. I am up for the challenge!

I am so excited to get to be Elphaba. I have been thinking about singing defy gravity as I walk around, we will see ha-ha. It will be fun to see who actually gets who we are dressed as.

[I will post pictures after Halloween on how it turned out.]

Are you dressing up this year? If you, or your kids, are let me know which costume you’re doing in the comments!