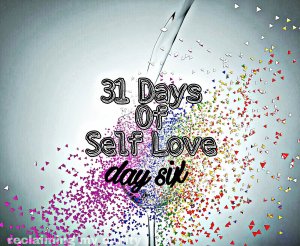 Day Six: What do you need to forgive yourself for?

In the past, I had a really hard time in letting go of things. I don’t tend to forget things that matter to me a great deal (and who would?). Mainly this is in reference to relationships with others. I hold a lot of resentment with some of the things people have done to me. As I stated in day 5’s post it makes it hard for me to be around these people.

I have put a lot of blame on myself for not being able to look past these things enough to be okay with being around them; family included. This past Fall season, I came to the realization that my feelings mattered. The resentment I was feeling towards others was for very real reasons. Reasons that I had no control over. I was putting the blame on myself when really it was not me to begin with. It was them.

I have to forgive myself for saying, “you know what, no, this was not okay what you did”. I know it has caused tension for me choosing not to be around the people who have caused the damage. Sometimes though, you have to stand up for yourself. If you don’t, no one else will. I cannot allow things to continue the way they have been. I bit my tongue long enough for the sake of the family. I don’t need that burden anymore.