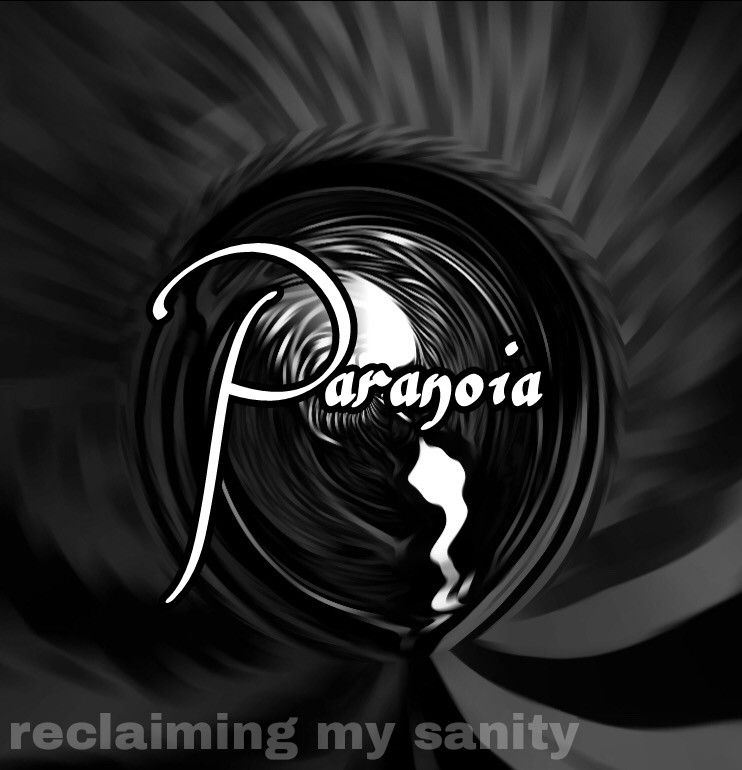 I know I talk a lot about my anxiety and depression, but there is something else that I haven’t covered yet. I actually did not even know this was a legitimate thing until recently.

I have not been formally diagnosed with this, but when I read more about it, the more it seems to make sense.

Psychologytoday.com defines it as “excessive distrust and suspicion characterize this condition. People with paranoid personalities rarely confide in kthers, and tend to misinterpret harmless comments and behaviors as malicious.”

I cannot tell you the amout of times where I am fear stricken when I really don’t need to be.

Last weekend, my best friend was in town. We were both standing outside my garage when I heard a noise, like leaves rustling around. The sort of rustling you hear when someone is walking through leaves. I looked around, expecting to see something, but I didn’t. I figured maybe it was squirrels or some kind of critter. We continued our conversation for a few seconds when all of a sudden two men emerge between the vehicles in the driveway. Mind you, this was 1 day after we officially moved in to our new house. We didn’t know anyone around, so we weren’t expecting people. My initial reaction, internally, was panic. On the outside I tried to come off as casual and calm. I mean, I did not know what their intentions were. My mind, however, goes to the worst sort of scenarios. I find myself trying to read their body language. I immediately notice one of the men had his hand inside his suit, near his chest. He also had a weird look on his face, almost like he thought he was the bees knees and refused to make eye contact. I began thinking “what the hell would I do if this man pulled out a gun?” The other man started with a smile and quickly said, “I am sorry to interrupt your pleasant conversation”. It didn’t take long for me to figure out they were Jehovah witnesses. I kept a watchful eye on the other man’s hand the entire time. My anxiety becomes physical in moments like that. I feel the rush under my skin. I feel my heart beating fast and hands trembling.

After they left, I finally was off the edge, but definitely needed to sit down.

Moments like that happen to me a lot. I use to wonder if I was literally crazy, being so paranoid. I use to tell myself, I was paranoid, but I would rather pay attention to these things than to be sorry for not paying attention. Then in the last few years, things have started happening that have made me feel my paranoia was justified.

Have you been aware at the human trafficking going on? I have heard numerous stories of kids being snatched or women being taken from Walmart parking lots. I have, in so many instances, felt so uncomfortable alone at any public place. In several instances, even being with people (that I knew) did not help me to be comfortable. I was constantly living on the edge of fear. Every stranger that walked behind me was potentially a creep trying to grab me or my child. Every knock on the door was an intruder. It seriously is no way to live a joyful life!

I have not been very open with people about this. My husband really is probably the only one who knows the extent of my fears. Granted, I don’t communicate every single one to him. It is not because I feel I need to hide, but more so because I know how irrational most of these fears are. Yet, they still are very present inside of me.

I have come a long way in the last 2 years, dealing with this paranoia ontop of my other issues. However, it still happens.

Anxiety makes us replay situations over and over, trying to pick it apart to find some answer of understanding. When you come out of a situation trying to not live in fear, and then your anxiety replays that moment later on. You find signs you may have missed and you become paranoid or anxious all over again.

A few weeks ago me, Chris, and our 2 kids were at the dollar store. I had gotten a bunch of stuff to make for baskets for the school carnival. We were in line at the register and behind us was an older woman. This lady kept asking me questions. At the time, I was trying to be social. I didn’t think much of a lady being enamored by 2 cute kids. I did think it was odd when she asked me their ages and when I gave her my answer she reacted kind of strange. She sort of knodded and was like “oh hmmmm”. At that moment, I became uncomfortable. It felt like she was interested in taking my kids. I quit being so social, even though she kept trying to make conversation. That evening, I saw a post on Facebook about a lady trying to lure women not far from where we were.

How can I get better, when so much of society is screwed up!? I do not understand what makes people think they can, or being okay with, taking children! I do not understand why human trafficking is a thing! It is absolutely terrifying and disturbing! I have to raise my kids and protect them from society. However, if I overdo it and they become mortified of society, what kind of adults would they become? Not all of the people are bad and I know that, but we also have to be careful. How does a paranoid person parent in a screwed up society without screwing up their kids? It is one of my biggest challenges as a parent.

I want my kids to be better than I am. I do not want them to be this anxious paranoid person. I am trying so hard to be better and show them how to be aware of their surroundings without overdoing it. Somedays, it just makes my head spin.

I can only hope I am doing right by my kids. I truly don’t think I will know if I am, until they are much older, maybe even adults. I just hope they know that I have and will always do my best for them because trust me the last thing I want is for them to end up like me.